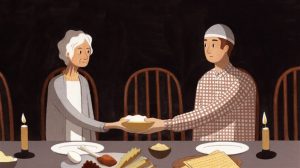 This year, Passover is being celebrated from April 19 to April 27, meaning we are right now in the midst of it. What is the meaning of this holiday? If you are not Jewish, you may not know much about Passover, except that it coincides with Easter — which is no coincidence in fact. Passover is celebrated for seven days in Israel, and eight days elsewhere, and it was during the time of Passover that Jesus died and resurrected, according to the Bible. It was for a Passover meal that Jesus gathered his disciples for The Last Supper. Both holidays’ dates are determined by the moon. In addition to these two holidays falling around the same time, they also share some symbolism, such as the egg as a representation of the cycle of life.

Passover is a commemoration of one of the most important events in Jewish history: the exodus of the Jews from Egypt, where they had been enslaved. The Hebrew name for this holiday, Pesach, is doubly-significant. First, there is the traditionally-sacrificed Paschal Lamb, called pesach, and second, the word pasach refers to the action of “passing over.” To understand this side of the meaning, we must know the origin story of Passover.

While the Jews were enslaved in Egypt (because the Pharaoh believed there were too many Jews in this country and did not want them to continue to procreate), a series of plagues hit Egypt as a form of retaliation by God. The ten plagues included locusts, diseases, and storms. The last of the ten plagues was a visit from the angel of death, who came to kill all firstborn sons in Egypt. The Jews, however, were able to protect their sons from being murdered by marking their doors with lamb’s blood. This way, the angel of death would “pass over” their homes, keeping their families safe.

Passover festivities usually include a seder meal, as well as prayer, song, stories, and discussions. The seder meal contains small amounts of several foods, each one with a symbolic meaning: shank bone (for the sacrificed lamb), egg (for the circle of life), bitter herbs (for the harshness of slavery), haroset (for the mortar used by Jews in Egypt), and karpas (for springtime). Matzah crackers are common as well, because they are made of unleavened bread. During Passover, Jews refrain from eating any leavened bread products, because when the Jews were leaving Egypt, they hastily brought the food they had, which was bread that had not yet had time to rise.

For those who do not celebrate Passover, we hope this has been an informative read, and for those who do, we wish you a Chag Sameach!

“I have been a student for nearly nine months at the time of this review. This is a fun and rewarding learning environment. I especially appreciate having a textbook and a workbook to aid in the learning process.”