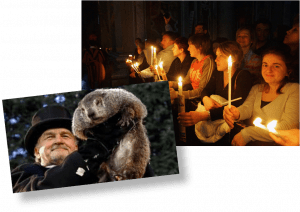 This Saturday, February 2nd, will be a day to celebrate many things: Jesus, light, crêpes, springtime, and meteorologist-rodents!

Originally an ancient pagan holiday, La Chandeleur or Candlemas has long been a Christian feast day, which falls annually on February 2nd. Candlemas is a celebration of Jesus Christ, falling during the 40th day of the Christmas season, and many Christians worldwide associate this holiday with candles, as Jesus was known as “the light of the world.” It is thus that the holiday got its name, and even in French, La Chandeleur is a fête des chandelles. These names both come from the original Latin name, festa candelarum – “feast of candles.” It is customary to celebrate by lighting all the candles in the house and to bring candles to church as well. Because this holiday falls during the beginning of February, it is associated with the beginnings of the end of winter. As we know, the days are getting longer, and it won’t be long until the warm weather returns (relatively speaking!). Does this idea sound familiar?

If you are in France, Belgium, or Swiss Romandy, you may be familiar with La Chandeleur because of its celebration of crêpes. What’s the relationship between a holiday of light and a day of crêpes, you may ask? Symbolically, the round shape and golden color of the crêpe is said to represent the sun, and again, the beginning of longer days. Following the dark cold days of winter, such warmth is indeed welcome, and even better in the form of a tasty treat. However, the reason for eating crêpes during Candlemas has a long history as well. Fifth century Roman Catholic Pope Gelasius I was said to distribute crêpes to pilgrims arriving in Rome. Another tradition says that the reason for crêpes or pancakes during Candlemas actually dates back to the custom of Vestal Virgins of ancient Rome giving cakes as offerings during the annual purifying festival of Lupercalia. According to legends around this holiday, if one can successfully flip a crêpe with one hand while holding a gold coin in the other, a bountiful and prosperous year will follow.

In some cultures, Candlemas is linked to the Epiphany, while in others, it has been increasingly overshadowed by the secular holiday Groundhog Day. Mostly celebrated in the United States and Canada (where it is also known as Jour de la Marmotte), Groundhog Day is indeed the day which is said to determine whether or not winter will be ending soon. Thus, following the ancient tradition of Candlemas and La Chandeleur, Groundhog Day is also associated with the beginning of warmer, longer days. Following this mythology, a groundhog who emerges from its burrow on this day and sees its shadow (due to the sun shining through the clear skies) is a sign that winter will persist for six more weeks. Contrarily, if the groundhog sees its shadow, clouds are forming and rain is on its way, which means spring is coming. It may seem contradictory that clear weather is a negative sign, but curiously, German legend says that clear weather on Candlemas is an indication of a longer winter. In German tradition, however, it is a badger, and not a groundhog, that predicts the weather. It was in fact in the German communities of Punxsutawney, Pennsylvania, in the year 1840, that the first Groundhog Day was celebrated!

Many parts of the world have maintained the traditional celebration of La Chandeleur, especially Quebec, Acadie, and other areas with a French cultural background. Elsewhere, a mix of these diverse celebrations is embraced. However you choose to celebrate, let’s hope that one thing remains certain: winter is ending soon!

“Planning a visit to Quebec province, I decided to attend a set of adult evening classes given by Nancy Scarselletta at a local high school. Her enthusiasm for, and knowledge of, the French language prompted me to sign up for further individual lessons. Over the last two years, I have come to appreciate Nancy’s vast experience –and infinite patience! — in teaching French with her unique emphasis on phonetics which she studied at the Sorbonne. In my opinion, French is not an easy language for English speakers given its unusual rules with multiple exceptions, potential liaisons, numerous irregular verbs, unfamiliar phonics, and plentiful idioms. I’ve appreciated Nancy’s approach and guidance throughout the course. And it’s been fun.”