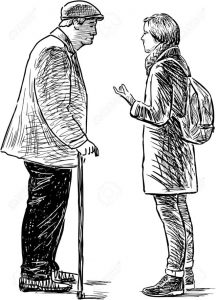 There is nothing new behind the idea that young people speak a “different” kind of English. For decades, it has been common to make fun of teenagers for using slang terms that, to the older generation, are either complete nonsense or have a wholly different meaning. To an erudite and worldly scholar, such terms may sound silly or meaningless, and it’s not uncommon to hear people condescend towards youths who don’t conform to the traditional or strict definitions of a word. But what happens when these words take on new definitions, and the most popularly-used dictionary affirms that these definitions are valid and correct?

Over the past few years, the Merriam-Webster dictionary has added such colorful terms to it’s lexicon as subtweet, mansplain, and swole. If these words mean nothing to you, consult your nearest millennial or generation Z-er.

What do such additions mean for our language? Is the structure that holds together our entire society falling apart? Or does this merely signal a shift in open-mindedness on the part of the lexicographers making these decisions? Better yet, perhaps it is just a shift in cultural attitudes that has allowed for more and more people to see language for what it is: an ever-transforming entity that, if it were to cease to change, would cease to exist.

Take for example the singular they, a pronoun that has emerged and become increasingly popular over the years to legitimize the identities of gender non-binary individuals. While many people struggle to understand this use of the word, which they believe to be ungrammatical, all that is needed to accept this change is a look back in history. The pronoun you was originally used much like the French vous, that is either in formal contexts or to denote plurality. For singular and informal reference, the pronoun in use was thou. You may have noticed that thou is no longer a word in common parlance, while you is used ubiquitously for the second person. The pronoun you took over, becoming the only second person pronoun in English around the start of Early Modern English. And today, nobody bats an eye. In fact, to use you in exclusively plural contexts would be perceived as bizarre. In the same way, the singular they is becoming more and more accepted and will continue down this path.

As Merriam-Webster explains, “The English language never sleeps, and neither does the dictionary. The work of revising a dictionary is constant, and it mirrors the culture’s need to make sense of the world with words.” We as English speakers can choose to go with the flow of culture or fight back, but we cannot stop the language’s inherent tendency to change.

“My daughter has been receiving private French lessons at the Language Learning Institute for about a year. Under the tutelage of director, Nancy Scarselletta, her listening, speaking, and writing skills have flourished and her confidence has grown immensely.”