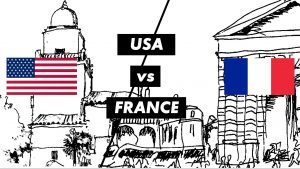 If you’re studying a foreign language, there’s a good chance that you’re interested in learning about different cultures. As far as Western cultures go, we share many similarities. After all, the world in the 21st century is smaller than ever: everyone is connected by the internet, and globalization has made it so that we share more or less the exact same products and brands. A major city without a Starbucks, for example, is hard to come by. Nevertheless, every country does have its own culture. In a country as big and vast as the United States, we can even say that every state has its own culture — or at least the regions such as the Northeast, the South, the West Coast, and so on. For now, let’s assume that the many cultures of the United States can be lumped together into one all-American way of life.

As Americans, we tend to idealize the European way of life, specifically that of the French. Is it really that different from our culture, and if so, in what ways? Here are some differences I have noticed between France and the United States. Of course, the list is not exhaustive, and we welcome your comments with further cultural differences you may have noticed!

1. Breakfast in France is exactly what you think: a pastry (typically either a croissant or a pain au chocolat) and a coffee (which is really more like an espresso). If you go looking for an American-style breakfast of eggs, bacon, pancakes, and so on, you’ll be disappointed very quickly. Yes, sometimes the French will start the day with crêpes, which might be filled with jam or just sprinkled with sugar, but this is also a snack that can be served at any time of day. And no maple syrup!

2. Given that the French breakfast is typically very light, serving a more filling meal at lunch — about the same size as dinner — makes sense. Not only is this a time to eat, however! In France, lunch is a time to take a pause from the stress of the workday, and touch base with your friends, family, or colleagues. Rather than eating in front of your computer and working non-stop, try to sit down for at least 30 minutes and socialize a bit, or maybe take a walk outside.

3. Speaking of food, the French stereotype about baguettes is true. On a typical day in France, you can see a number of people walking down the street carrying baguettes home from the local boulangerie. Bread is served with almost every meal. As one local told me, “si on n’a pas mangé du pain, on n’a pas mangé.”

4. In France, as in many countries around the world, traveling outside of the national border is as easy as hopping on a bus or train. Thanks to the EU, in France you can travel to virtually any other European country without even passing through customs. In the US, it’s hard to imagine going to a different country for just a few hours and coming back, but in Europe, it’s as easy as crossing state lines for an American. This makes seeing different cultures and eating different cuisines an easy and fun adventure for anyone willing to make the trip!

5. In France, you are constantly surrounded by beautiful architecture. Being in the “New World,” we Americans are not used to seeing old stone buildings everywhere we go. We are more accustomed to the 20th century suburban homes and modern skyscrapers, depending on what part of the US we live in. In Europe, you are constantly surrounded by gorgeous architecture that is centuries old. Walking down narrow cobblestone pedestrian streets with plazas every few blocks is a sweet everyday pleasure of European life.

Tell us, what are some of your favorite things about life in France? Or cultural differences you’ve noticed?

“Travelling with the Language Learning Institute is a wonderful experience! The groups are small, there is a lot of variety, and the trips are flexible enough that you can break away and do your own thing for a while if you want. I have never really wanted to do that, though, because the planned activities are so interesting. I have been on two trips on which I learned a lot about the different regions of France and even Belgium. The trip cost includes five or so sessions before the trip in which we learn about what we are going to experience and in which we learn a little of the language so that we can at least order in French. There is also a wine and cheese party in which we sample the products of the regions we are going to visit and in which we get to know our trip mates better. I would recommend the Learn French and Travel trips to anyone, but particularly for those who want to visit a country in a way that combines the security of a group with the flexibility to do your own thing!”