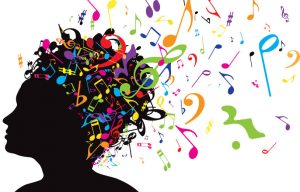 Have you ever thought of music as a form of language? Think of the way music hits your brain, triggers your memories, and can help stimulate your thoughts. Think of the way that music can be “read” — just like the words of a book. Much like language, music is something that is shared universally across human cultures and societies. What else do music and language have in common?

Consider the way that you can recognize the same piece of music whether it is played by a violin or guitar. Similarly, you can recognize the same phrases being spoken by two completely different voices. The brain is actively absorbing what you are hearing because it is familiar to you. What about when you hear something spoken in a language you do not understand? You probably would not be able to repeat the words said in a foreign language, because it is not recognizable by your brain. You could also not reproduce a piece of music perfectly after hearing it just once (unless you are a true virtuoso!).

The connection between music and language goes deeper. It has been proven that children who study music at a young age will develop a larger vocabulary and possibly even a better understanding of grammar than those who do not. It is therefore easier for them to take on learning a second language. Why is this? It is likely due to the fact that both music and language, when studied seriously, are based on a deeply systematic structure. Much like math and computer programming, music is related to language in this way.

Perhaps the most compelling point to demonstrate the connection between music and language is the way that music activates the pathways of the brain. When musicians listen to music, activity can be seen in the left planum temporale, which is the same area of the brain where language is processed. However, when non-musicians listen to music, this does not appear to be the case. Again, this is similar to when we hear the chatter of speakers of other languages that we do not understand. To our brain, this is just blabber, no more intelligible than an infant’s mindless mutterings. For those who have studied music, the understanding of musical input is much deeper, similar to hearing a language one does speak.

Just like learning language, studying music is said to lower your chances of developing dementia, or at least put it off. And if you really want to keep your brain fit, try learning to play or sing a song in the language you are learning! It will help exercise both skills more effectively than doing either one by itself.

“A positive learning environment has helped me achieve my goal! It is worth it!”