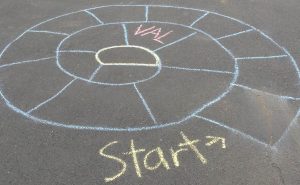 Like its counterpart (hopscotch), this game involves young children hopping on one foot from space to space. It’s affectionately named escargot (snail) due to the resemblance of its spiral shape to a snail shell. There are different versions of the game.

One involves starting on the outside of the shell (see image) and hopping towards the center in a spiral like fashion on one foot. Once a child manages to get to the center on one foot, he has the right to put his name on one of the spaces. The next time it’s the child’s turn, he can put two feet down on his claimed space. Other children must hop over claimed spaces on one foot. The child with the most claimed spaces at the end wins.

On one of these warm summer days, it’s a delightful way to spend an afternoon. Try it with your kids or play it yourself. It’s fun even for adults.

“It was stress-free. Lots of fun with a lot of learning.”