Leonardo da Vinci was born in Anchiano, Tuscany, in Italy. He was born on April 15, 1452. Not only was Leonardo da Vinci an incredible artist, but he was also an extremely talented inventor, in fact there is a museum of science dedicated to his inventions in Rome. Among his most famous paintings are Mona Lisa and The Last Summer (pictured below). da Vinci died on May 2, 1519, in Amboise, France.

Claude Monet was born on November 14, 1840, in Paris, France. His famous classic style is known as impressionism, and his works had a huge role in the French Impressionist movement. Like many painters, Monet struggled with emotional feelings of depression and despair as well as poverty. His among his most famous works are The Water Lilies (pictured below) and Woman with a Parasol. Monet died on December 5, 1926 in France. 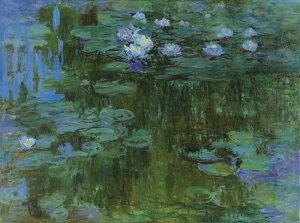 “A positive learning environment has helped me achieve my goal! It is worth it!”